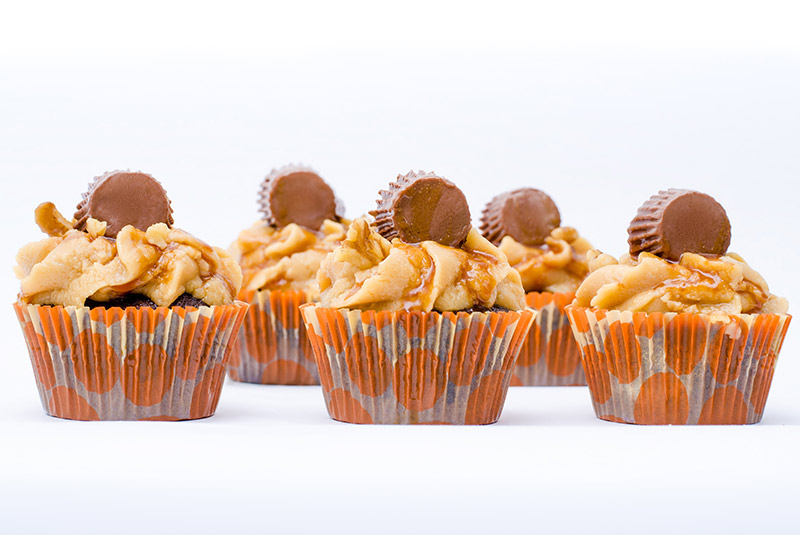 Do you believe in love at first bite?

You will after you try these vegan, gluten free, peanut butter banana bread bites!

These magnificent, moist, and “Mmmmmm” worthy morsels are made with oats instead of wheat, so they’re gluten free.

And the egg replacement is made by combining ground Flaxseeds with water.

These terrific treats will take your tastebuds on a trip to heaven & are sure to leave you speechless!

I bake them in a muffin pan and top them with peanut butter, so they’re almost like a cupcake!

I actually recently gifted them to a few friends who told me they’re more of a cake than a bread, so I think it’s fantastically fitting that they could be mistaken for cupcakes.

Here’s what you need to make them for a special surprise, a typical Tuesday or even on Earth Day!

*I buy my Flaxseeds whole and ground them myself in my mini Ninja Food Processor. Doing it this way keeps them fresher, longer. Once the oil that’s released when grounding is exposed to the air, it begins to break down and turn rancid, which won’t hurt you, but will affect the freshness / taste. That’s why I ground mine fresh immediately before using.

**For some strange reason, I never seem to have any baking powder on hand. So when I heard that combining Cream of Tartar with Baking Soda will have the same effect as using Baking Powder, I was thrilled! I tried it and it turned out to be true!

Here’s what you do

Step One: Preheat your oven to 350°F, use your favorite method to make your muffin pan a non-stick surface (line with papers, silicone cups, coconut oil, etc) and set aside. I lightly coat mine with coconut oil.

Step Two: Add two cups of the Old Fashioned Oats into a blender or food processor, reserving the ½ cup for later, and process until you create an “oat flour.” I use my mini ninja food processor for this.

Step Three: Ground the Flaxseeds. Then, mix the ground Flaxseeds and Filtered Water together in a small bowl, stir thoroughly, and set aside. This will create your “Flax Eggs.” Be sure to allow the mixture to sit for at least 10-15 minutes.

Step Four: Thoroughly mix the Baking Soda and Baking Powder together in a small bowl.

Step Five: Combine all the “dry ingredients” (the Oat Flour, Coconut Sugar, Sea Salt, Cinnamon & Baking Soda + Cream of Tartar mixture) in a large mixing bowl and whisk them together.

Step Six: Combine all of the remaining ingredients (Peanut Butter, Bananas, Apple Cider Vinegar, Vanilla & Flax Egg) together in your food processor & process until it is evenly incorporated. This can alternatively be done by mashing the bananas in a bowl with a fork and then mixing everything together.

Step Seven: Slowly pour the Banana / Peanut Butter mixture from the food processor into the mixing bowl with the dry ingredients and stir together until everything is evenly assimilated into a uniform “dough.”

Step Eight: Fill each muffin cup evenly with batter & bake for 20-30 minutes, until the top is golden brown and / or until a toothpick can be inserted and removed cleanly.

Step Nine: Allow the bite-sized-breads to cool slightly in the pan before removing, then transfer them to a cooling rack to allow them to finish cooling completely.

Step 10: After they’ve cooled and you’re ready to serve, spread peanut butter over the top of the bites & bon appetit!

After transitioning from the “standard american diet” to a lifestyle that is “plant-based, gluten-free & clean eating,” she reversed multiple mounting health concerns, lost 110 pounds and fell pregnant! Stephanie shares her story and her recipes on her blog, Crunchy Veggie Mama, where she is a “mama on mission to motivate & inspire others so they too can live the happy, healthy, holistic life of their dreams!” You can find more of her plant-based plates on crunchyveggiemama.com.

You can find out more about which cookies we are using or switch them off in settings.

This website uses cookies so that we can provide you with the best user experience possible. Cookie information is stored in your browser and performs functions such as recognising you when you return to our website and helping our team to understand which sections of the website you find most interesting and useful.

Strictly Necessary Cookie should be enabled at all times so that we can save your preferences for cookie settings.

If you disable this cookie, we will not be able to save your preferences. This means that every time you visit this website you will need to enable or disable cookies again.

This website uses Google Analytics to collect anonymous information such as the number of visitors to the site, and the most popular pages.

Please enable Strictly Necessary Cookies first so that we can save your preferences!